When you hear the name Rembrandt, what comes to mind? If you’re like most people, you imagine mustachioed merchants looking all pious and respectable and shit. His work is among the most influential and renowned in history. But in his lifetime, he was just a dude, and when a patron refused to pay for a commissioned portrait, he reacted like most dudes would act today, with the 17th century Dutch equivalent of Photoshopping dicks on his face:

This is what Rembrandt thinks of your criticism, assholes.

As it turns out, history is full of artists whose greatest works are superbly crafted middle fingers.  For example…

Looking into his eyes may cause unexpected pregnancies in fertile women.

Whenever you think about Roman architecture, you probably think of lots of immaculately chiseled dicks. And Gian Lorenzo Bernini, known as the God damn Cavaliere. is just as responsible as anyone for the aesthetic of 17th century Rome and, by extension, so many dicks. His most famous work is The Ecstasy of St Teresa, which you may notice is a freaking nun in the middle of an orgasm.

“Nun orgasm” is a Google search you don’t live down.

But it wasn’t all chiseled dicks and nun orgasms for the Cavaliere. Bernini had a Mozart / Salieri relationship with another prominent architect, Francesco Borromini. And, like an Italian precursor to Walt Disney, Bernini didn’t always credit those who worked for him or on his various projects. When Bernini planned two bell towers for St. Peter’s Basilica, his largest and most ambitious project, he didn’t bother consulting Borromini, the more accomplished architect. Within weeks cracks began to appear on the base of the right tower and started spreading. When it was discovered that the towers were built on boggy ass swamp ground, and the damage spread to the facade, the decision was made to take them down. Truly, the biggest embarrassment ever to befall a Cavalier.

For a while there, things got pretty rough for Bernini: he caught his brother having an affair with his mistress and reacted like any reasonable adult: he tried to kill his brother and slashed his mistress’s face up, like a less ridiculous version of that fucking stupid scene in Hannibal. You know the saying: when life gives you lemons, cut a bitch. And yet, despite the little setback of attempted murder and assault, Bernini would eventually triumph, proving once and for all that, Fuck you, Borromini.

Borromini would later commit suicide, after a lifetime of depression and insecurity. Here’s a parallel: imagine that that guy from college, you know the one, the one you compete with and embarrassingly compare your success with. Now, let’s say, you turn in Twilight: Eclipse as your English project. And he responds by turning in The Odyssey, Hamlet, and just for good measure, he fucks your dad. What would you do? Exactly. 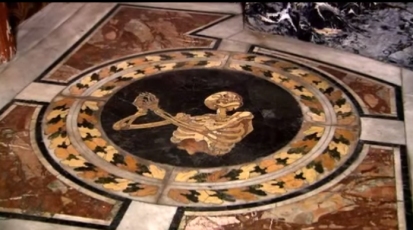 Fuck your deeply ingrained feelings of doubt and inadequacy!

Next: Picasso VS the Nazis  –>